The Boring Co. unveiled on Tuesday the proposed route its underground people mover project would follow through downtown Las Vegas. 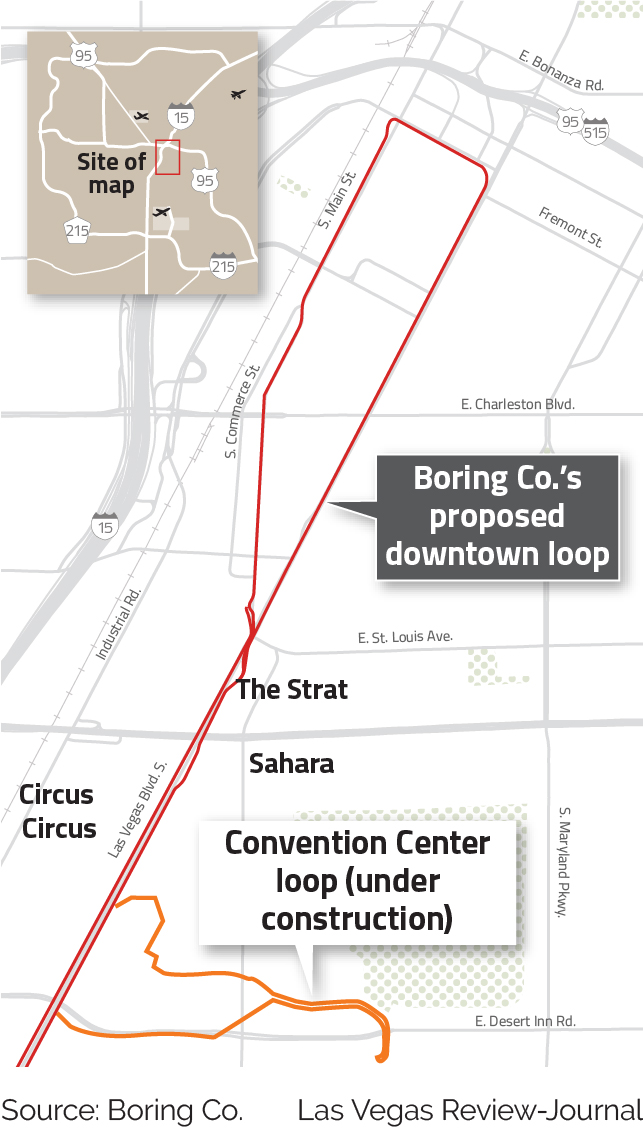 The map was unveiled Tuesday evening as part of the project’s special use permit application to the city’s Planning Commission, which unanimously approved the application. The application next goes before the City Council.

With road projects already underway on Las Vegas Boulevard between Sahara and Stewart and on Ogden between Main Street and and Third Street — on top of a recently completed project on Main Street — the city has a wealth of information available on underground utilities in the area, which should help advance Boring’s project.

“We have that entire route either under construction today at the surface level, where we’re putting in new utilities, or we’ve recently completed it,” said Michael Janssen, director of public works for the city. “What’s unique about that is that we have a wealth of information that we’ve been able to share with the applicant (Boring Co.), where if not for that they would be starting from scratch.”

Boring President Steve Davis said the fact the city already had information on the utilities available probably saved about three months of work.

Davis used a real-life example of how long it took him to travel from the Convention Center to City Hall downtown to demonstrate how quickly Boring’s system could transport passengers by running underground with no traffic impediments.

“I drove here from the Convention Center, where we’ve already built two tunnels … and it took me about 14 minutes,” Davis said. “Our loop system, which is what we’re proposing here, would be a 3-minute ride.

“The point of the tunnels,” he added, “are to be affordable, safe public transportation and, really, to solve the traffic problem.”

Davis said that the system, which will use Tesla model vehicles to transport passengers through dual tunnels, is slated to run from the Fremont Street Experience downtown to Allegiant Stadium and McCarran Airport to the south, with stops at resorts and major points of interest along the way.

The system would run point-to-point, which would allow passengers to be transported to a specific stop on the route without having to stop at each station along the way.

“If you built a subway from Fremont Street to the airport and you have 30 stops all along the way, that’s a very long ride,” Davis said. “If you have an express system, where you go from one place to another, that is a very short ride.”

Commissioner Sam Cherry asked Boring to consider a stop at the Arts District and was hopeful the company would work on the cost of such a stop with the city and Arts District to make it a option.

“The stops are pretty much funded by the people at the stops, the hotel-casinos. Again we’re different in the Arts District when coming through that neighborhood there’s not just one big casino,” Cherry said. “Anything that is equitable for both parties in conversation I think is a very positive thing. As the casinos grow… more hotel rooms will be coming online, and as we have the medical district growing, there’s going to be a larger population down here. So we need solutions to move people back-and-forth around the city.”

Boring’s proposal already includes possible stops at the Arts District and City Hall and courthouse. A proposed cost on those will be provided at a later date, Janssen said.

“We’ve already had some early discussions with Steve (Davis) and his team,” Janssen said. “My team has already taken a few stabs at some concept designs on how one might fit to service city hall and the Arts District.

Greg Stevens, co-owner of the recently opened Circa casino that is one of the planned downtown stops, is excited about the possibilities of the tunnel system.

“We’re very excited and happy this is finally coming to fruition. We’re fully in support of being part of this and having the loop come right at our front door and hopefully put one of the first stations in our Garage Mahal,” Stevens said during the meeting. “Hopefully we can get people directly from the airport or the Strip or the game (at Allegiant) to downtown Las Vegas. I think it’s a great thing for downtown.”